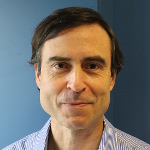 Luis Pastor is full professor at URJC (2000) with more than 30 years of experience teaching at different universities. He is Industrial Engineering at UPM (1980), M.S. in Industrial Engineering at Drexel University (1983) and Ph.D. in Industrial Engineering at UPM (1985, distinguished with the Fundación José Antonio de Artigas y Sanz prize to the best Ph.D. Thesis in the field of Electronics, Informatics and Automatics). Since 2007 he is the headmaster of the Computer Science College at URJC and heads the research group on Modelling and Virtual Reality. In recent years, he has worked on virtual reality, visualization and interaction, in particular in neuroscience, where he has made major contributions to the Blue Brain and Cajal Blue Brain projects. In addition, he works in high performance computing and its application to graphics and imaging. 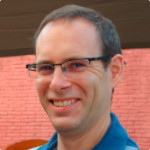 Miguel A. Otaduy received his BS (2000) in Electrical Engineering from Mondragon Unibertsitatea (Spain), M.S. (2003) and Ph.D. (2004) in Computer Science from the University of North Carolina at Chapel Hill. He completed his Ph.D. thesis in the field of haptic rendering under the advisory of Prof. Ming Lin. Between 1995 and 2000, he was a research assistant at Ikerlan research lab, and between 2000 and 2004 he was a research assistant with the Gamma group at UNC. In the Summer of 2003 he worked at Immersion Medical. From 2005 to 2008, he worked as a research associate (oberassistent) at the Computer Graphics Laboratory of ETH Zurich, with Prof. Markus Gross. Miguel is at URJC Madrid since 2008. His main research areas are physically-based simulation, haptic rendering, collision detection, virtual reality, and geometric algorithms. He is particularly interested in the simulation and interaction with virtual objects in contact, with application to virtual prototyping, computational medicine, animation, or videogames. He is a recipient of a 2011 ERC Starting Grant. Miguel will be program co-chair of the 2014 ACM Symposium on Interactive 3D Graphics and Games (I3D) and the 2015 IEEE World Haptics Conference (WHC). He was also the program co-chair of the 2013 WHC, the 2013 Eurographics short papers program, the 2010 ACM SIGGRAPH / Eurographics Symposium on Computer Animation (SCA), the 2010 Spanish Computer Graphics Conference (CEIG) and conference co-chair of the 2013 I3D and the 2013 CEIG. 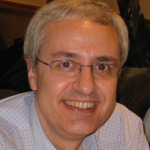 Ángel Rodríguez is associate professor at the Computer Science School in the UPM. He has participated in numerous national and international projects funded by both, public and private organizations (more than 30). He is currently member of the Virtual Reality and Modelization Group and his research line is focused on visual analytics.