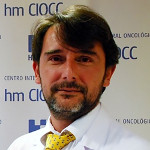 Cristobal Belda-Iniesta is medical oncologist and current CEO of HM Hospitales Foundation for Research. Ph.D. in Medicine from UAM and former CEO of the Spanish National School of Public Health at Carlos III. He has developed his career in biomarkers of cancer and, recently, how health economics may help new biomedical advances to be implemented in real life, publishing more than 80 peer-reviewed, JCR- indexed, international papers and international patents for new approaches on biomarker analysis and leading more than 100 clinical trials mainly in lung and brain cancer. His research team led many research projects dealing with biomarkers, promoting high-level methodology of biomarker quest into a variety of research areas far beyond oncology. They have been involved in pivotal clinical trials allowing many drugs and biomarkers to be incorporated into clinical practice and they now are facing limitations of liquid biopsy for solid tumors in real life.

José Luis Rojo-Álvarez (Spain, 1972) received the Telecommunication Engineering Degree in 1996 from University of Vigo, Spain, and the PhD in Telecommunication in 2000 from the Polytechnical University of Madrid, Spain. Since 2016, he has been a Full Professor in the Department of Signal Theory and Communications, University Rey Juan Carlos. He has published more than 90 papers in JCR journals and more than 150 (inter)national conference communications. He has participated in more than 50 projects (with public and private fundings), and directed more than 10 of them, including several actions in the National Plan for Research and Fundamental Science. He was a Senior Researcher at the Prometeo program in Ecuador (Army University and Telecommunication Ministry). Currently he is running a pioner Degree Program on Biomedical Engineering, involving Hospitals and Companies in the electromedic and eHealth field. His main research interests include statistical learning theory, digital signal processing, and big data technologies, with applications to healt and to cardiac signals and image processing. He joined Persei Vivarium, an eHealth company, as Chief Scientific Officer in 2015. He is also involved in Pulsecurity, a start-up for digital signal processing monitoring of elderly people. In 2016 he received the Price to the Talented Researcher from Rey Juan Carlos University.

José L. Ayala is an Associate Professor in Complutense University of Madrid in the area of Computer Architecture. He got a PhD in Telecommunication Engineering (2005) and a MSc (2001) both from UPM; he also got a MSc in Applied Physics (2002) from UAM. He has expended part of his research career working for international institutions like EPFL (Switzerland), UCLA (USA) and UCI (USA). Prof. Ayala has leaded and participated in several national and international research projects in the area of energy efficiency, EDA, and bioengineering. He also collaborates actively with industry for the participation in innovation projects and clinical studies. Additionally, he serves in IEEE Council of Electronic Design Automation as VP Publicity, he is the CEDA representative in the IEEE IoT Initiative, and the chair of R&D for the IEEE Smart Cities Initiative. He has also organized several international conferences (VLSI-SoC, GLSVLSI, PATMOS, MCSoC), and served in the Executive Committee of some of them (DATE, MCSoC). Finally, he has advised 6 PhD Thesis so far, and currently advises other 4 PhD students in the field of eHealth.